Approximately six years ago I suffered a serious sexual assault at the hands of another artist, who at the time was also considered a close friend of both myself and my partner.
As a long term sufferer of mental health issues, this incident exacerbated and intensified my problems – flashbacks, self-harm, depression, anxiety, a worsening of my agoraphobia, suicidal behaviour and ultimately a diagnosis of PTSD, on top of other pre-existing conditions. Abusers do know how to pick their victims.

Over the years of living with my mental health issues, I’ve engaged with various medications, therapies and support services, and the idea of ‘Art Therapy’ has come up from time to time. I’ve not found it useful for my personal experiences, although I do believe in the right circumstances and for the right individual, AT can be outstanding. I think a combination of already using elements of my art to channel certain personal feelings, thoughts and experiences, and a long education in art history and theory, has possibly jaded me to any kind of traditional Art Therapy engagement.

However, when I was invited to contribute to all female show, I saw it as a possibly cathartic opportunity to process some of my emotions towards the assault in what I perceived to be a relatively safe space:

‘Warriors’
‘Artist Lizzie Biscuits , inspired by the recent political climate and a heartening groundswell of fierce femininity is curating an exhibition and Art Happening at Exchange Place Studios, Sheffield centred on the theme of WARRIORS.

The event will consist of two parts, a static exhibition running from Friday 29th September through to Sunday October the 1st (11am – 4pm) and an evening event on Friday the 29th featuring performance art and artists.

This is to be an adult exhibition. Provocative and openly political work is welcomed but is in no way mandatory.

The exhibition is designed to reflect, inspire and offer empowerment.’ 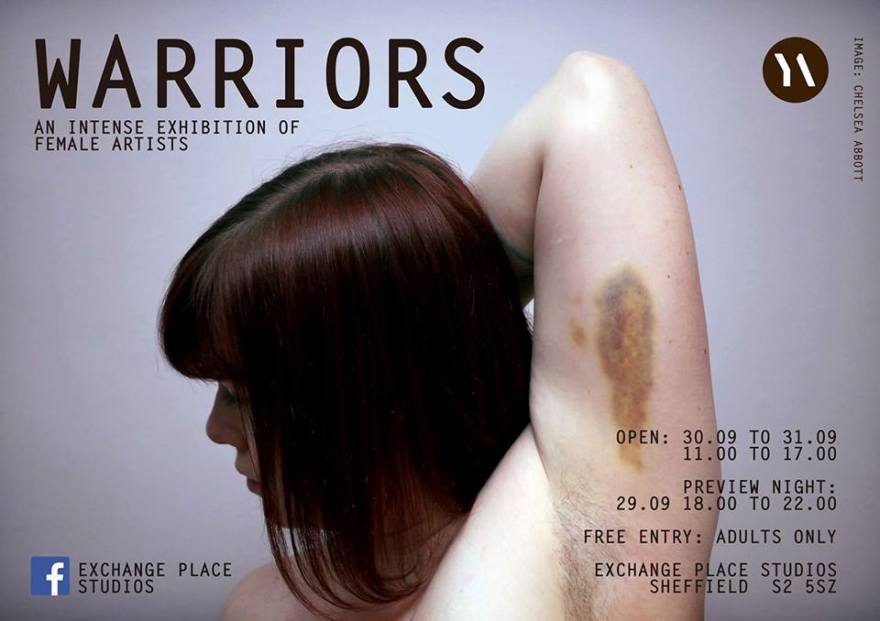 My proposal:
‘I proposed a ‘diptych’ of work, consisting of a static 2D illustration, and 3D installation of a garment. For an hour of the event I will wear the latter and answer questions, or offer conversation from the point of view of the subject. I do not require that the audience be static, nor do I require silence for the duration, I see it as a causal, conversational piece that the visitors to the exhibition may choose to engage with or not.
For the remaining duration of the exhibition the garment will be displayed on a stand adjacent to the 2D work.

The subject of the work will be around the beheading of Holofernes by Judith as interpreted by the painter Artemisia Gentileschi.

‘Judith beheading Holofernes’, was a popular subject for artworks during the Renaissance and Baroque periods. It concerns the biblical story of Judith (a Jewish widow, sometimes described as a princess) and her inveiglement and ultimate beheading of Holofernes, an Assyrian general in the army of Nebuchadnezzar II in approximately 617BC, who had lain siege to her city. His killing raised the siege and led to the departure of the army, thus saving the city, with Judith being celebrated as a saviour and hero.

I will be using Artemisia Gentileschis 1614-1618 interpretation of the subject.
Previous to Artemisa’s (using her first name to save confusion with her father) interpretation, it can be said there’s a certain staid classicism of the subject. Atemisias brought a visceral reality to the scene. It’s long believed that she painted herself as Judith, and Holfernes as her real life rapist Agostino Tassi.

My work will deal with the female gaze and POV in art, the erasure of women’s identity, and the confusion and reduction of artist to art, alongside personal themes of rape, recovery and the struggle to vocalise the internal dialogue post-trauma.‘

I created the garment for the piece from scratch – I researched the typical dress of the period from historically-correct patterns, in particular Janet Arnold‘s pattern from the 1560s of Eleonora di Toledos burial gown. During creation and research of the garments I realised that Artemisia Gentileschi painted the same dress over and over again – the trim was sometimes removed or changed and the sleeves were subtly altered, restyled or just left off, but it is intrinsically the same dress. I found this an interesting observation, and something that I hope to return to and to undertake further research into.

The 2d illustration was taken directly from Artemisia‘s painting, and interpreted in my own ‘Ligne claire’ style in a restricted palette. I deliberately left the male face/Holofernes blank – I have deliberately disempowered and depersonalised my attacker, as he depersonalised and disempowered me. The figures of both Judith and the nurse are representations of myself: both myself now during the performance, and myself as I approximately appeared at the time of the assault.

For the duration of the performance I sat on a chair in the gallery space dressed in the 16th-century gown splattered with blood, next to my illustration with the blooded sword on my lap, and with the basket with the wrapped, still-bleeding decapitated head on the floor next to my feet. I was visually depicting the moment just after Judith had beheaded Holofernes and had made her escape. I let my thoughts unroll – I pushed myself try to feel where the three women‘s experiences overlapped – I began to intertwine my personal trauma with both Artemisia and Judith. I experienced rolling waves of absolute fury and then despair. I was shaking with anger, so full of the rage that came in peaks, subsiding only into total anguish.

I drank wine during the performance, a conscious act of both celebration and lament.
Afterwards the exhaustion was so intense, I felt purged by the experience, both empowered and depleted – immediately afterwards I was full of the jittery nervous energy of the ‘performance high’. It was hard to focus. I had asked a friend to be both my ‘minder’ during the performance and also my dresser, (16th century gowns are very hard to get on and off!) – she peeled me out of the garments, helped me dress in my own clothes and helped me ground myself.

The response to the performance was very positive, people expressed surprise and admiration at both the craft of the gown, the interpretation of Artemisia‘s work, and the transformative aspect of my personal performance. I had hoped that more visitors would have verbally interacted with me, but I found out afterward that I looked so angry, so furious and fierce that people even friends were frightened to speak to me. I’m curious as to why only the anger showed, not the fear or despair I experienced?

In reflection, the performance was indeed a cathartic experience for me. It has not magically healed me of all of my trauma, but it has opened new dialogues and unexpected avenues of support, and created something positive out of something so horrible.
I have interest in recreating the performance. I would like more interaction from the audience, a consideration would have to be made as to how to elicit that, whilst still maintaining a spontaneous energy. I would be curious to find out how my own reactions will have changed: would I still experience the same extremes or would I be suppressing these through their expectation?

The performance was staged in September 2017. It has taken me nearly a full year to process the experience as part of my ongoing recovery.

With extra thanks to Lizzie x 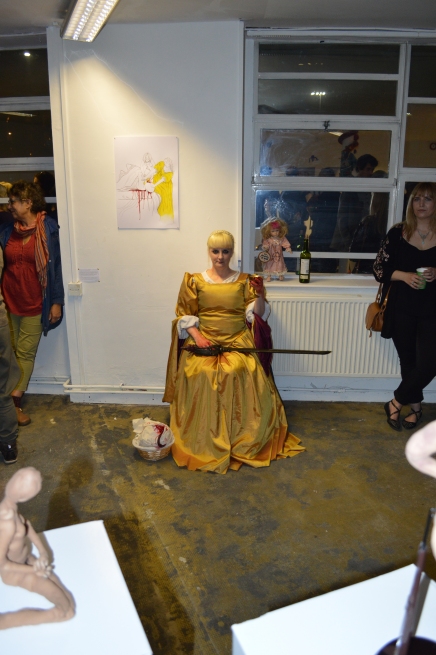 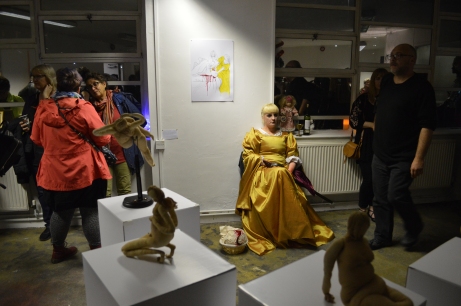